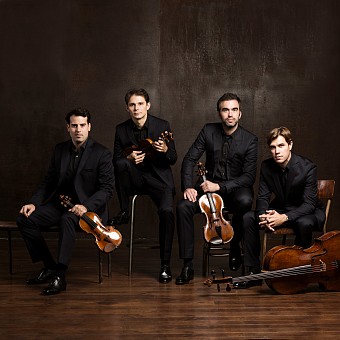 The hometown of the Quatuor Modigliani string quartet is Paris. The love and admiration for the Italian-like Frenchman Amedeo Modigliani’s art was so strong in the hearts of four Conservatoire de Paris students that they named their newly founded ensemble after him.
Quatuor Modigliani is a frequent guest in the most prominent European chamber music festivals and concert halls, and the first string quartet to have the honour to play in the Elbphilharmonie in Hamburg.
Their 15th season will be celebrated in the Wigmore Hall in London and in the Louvre Museum in Paris; in the Cologne Philharmonic and in the Pierre Boulez Saal in Berlin; and alongside New York, Tokyo, Brussels and Munich they will also include the Baltic shore – Jūrmala. The concert programme will encompass three centuries, picking as its centrepiece the romantic songsmith Franz Schubert’s late quartet Death and the Maiden, which was born as a solo song and later became a strong symbol for its time.  The representative for Classicism will be Joseph Haydn’s peculiar String Quartet in D minor Fifths, and the 20th century is showcased by the densest chamber opuses of the century – the fiery Béla Bartók’s String Quartet No 3.